Barcelona is an enriching city filled with art and culture. Every street corner is teeming with life and the people emanate immense amounts of energy, from the very young to the very old. Perhaps one of the most striking features of the city, however, is the architecture. Far and few in between will you come across architectural gems imbedded within the busy streets and at times trash-filled corners, but if you look closely enough, you will see them. One of the most iconic creators of these works of art is Gaudí. Upon exposure to the city, my eyes were opened to the enrapturing world of architecture. Seeing these structures broadened my awareness, and beckoned me to stop and appreciate the designs.

Antoni Gaudí, put simply, is a genius. His projections are a creative synthesis of traditional Catalan expression, as well as modern technical and scientific influence. He uniquely intertwines geometric patterns with elements of nature – an influence that works to generate a sense of otherworldliness. In order to surrender himself to the will of nature, his designs lacked austere edges, straight lines, and sharp corners. Instead he incorporated whimsical patterns, sensual curves, and bright colors to mimic the wild beauty that we share this earth with.

In many of his projects we see subliminal figures accentuating the relationship between humans and flora and fauna, along with celestial bodies. Gaudí’s work suggests that he creates with organized chaos – fluctuating notions of precise planning and sporadic, almost random accents. Just as the environment transforms and adapts over the course of time, so did Gaudí and his ideas.

Although all of his work inspires me, I believe Parc Güell is an exceptional example of Gaudí’s artistic expression and representation of Cataluña. The benches represent water and the columns and cave-like tunnels are structured to mimic dripping mud, to embody the Mountain Montserrat. The main entrance where you will find the dragon represents Saint George, a holiday in which the Catalans celebrate the slaying of the dragon whom consumed their livestock and princesses and in turn, its blood turned to roses. Every element in the park is symbolic of Catalan people and their culture and beliefs. 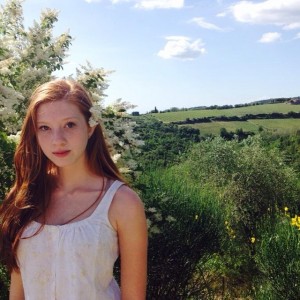